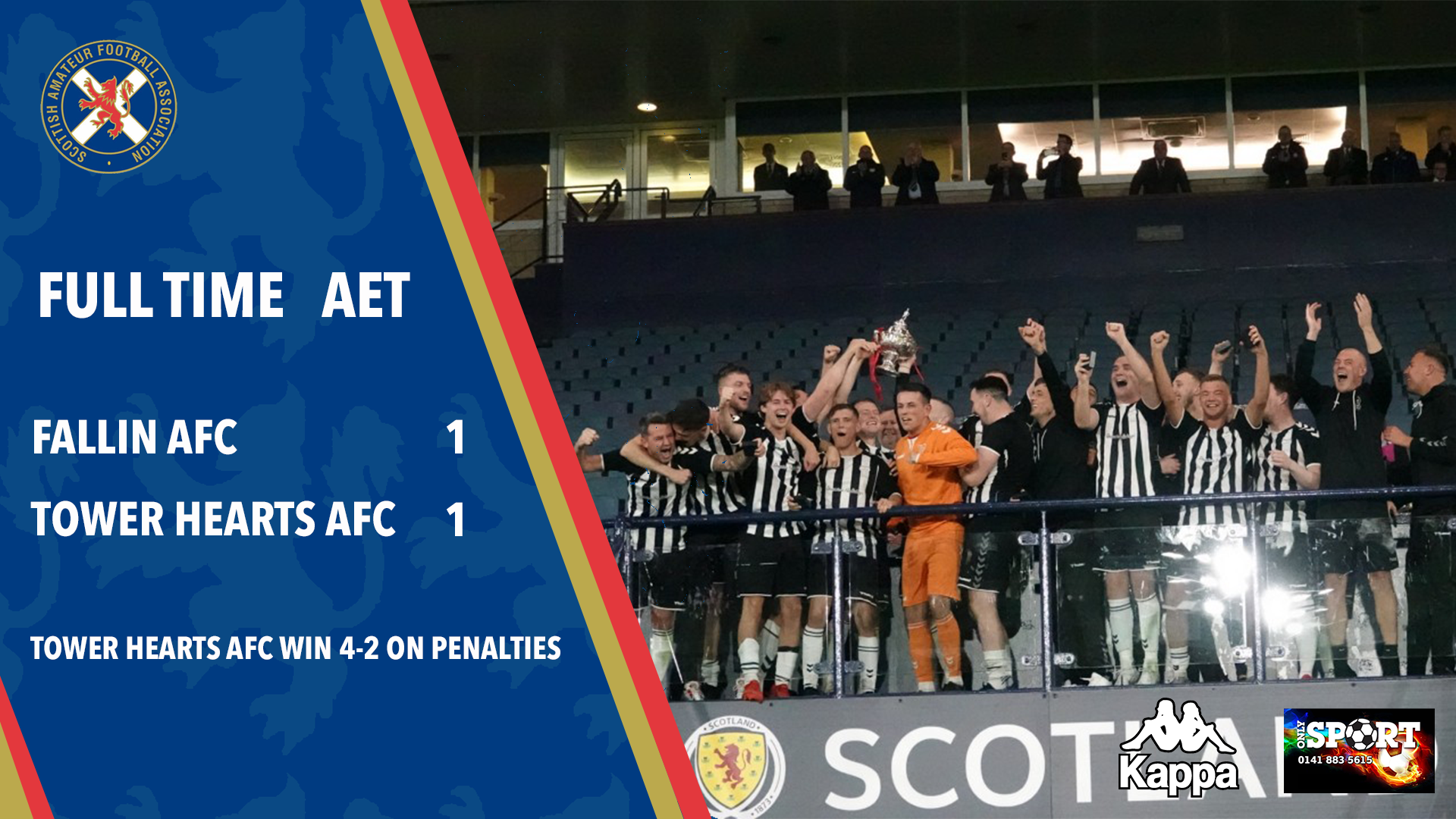 It was hardly surprising this contest between two sides from the Central Scottish AFL was a game of few clear-cut chances.

Both sides had demonstrated remarkable defensive resilience throughout their journey to the showcase final: Tower Hearts had conceded a miserly one goal in their 7 ties, with Fallin conceding just 2 goals after having played one match more than their opponents.

Fallin enjoyed the better of the opening exchanges without posing any serious threat to the Tower rear-guard.

Tower opened the scoring from the penalty spot on 35 minutes after a clumsy challenge presented match referee Nicolle Andrews with an easy decision. David Quinn gave Fallin keeper Michael Watson no chance, sending his spot kick high into the top corner for 1-0.

After a confident start, that goal unsettled Fallin. Tower enjoyed the better of exchanges and spurned a decent opportunity to extend their lead after 33 minutes. Jordan Davidson sent his effort wide after good work from Connor Brannigan.

Fallin began the second half in determined fashion. Graeme Milne did well to gather a fiercely struck effort from Stuart Henderson. The Tower defence then cleared after Milne had been able to hold a Fallin corner swung in from the left.

It was little surprise when Fallin equalised after 50 minutes.

Kyle Imrie created the opening with fine work down the right flank before crossing into the heart of the area. Stephen Donaghy timed his run perfectly to direct a powerful header back across goal and high into the net for 1-1.

The game settled into a midfield stalemate with neither side able to forge any clear opportunities. The energy-sapping Hampden pitch started to take its toll on a number of players, resulting in a raft of substitutions. Not surprisingly, the match then lost some of its fluency.

After 81 minutes, Fallin passed a decent opportunity to snatch victory in regulation time. A perfectly weighted pass found Stephen Donaghy clear some 14 yards out. Donaghy rushed his effort and volleyed over from a good position.

Tower were first to threaten in Extra Time, Jordan Davidson trying his luck with an ambitious 24-yard lob. Fallin responded strongly. Kyle Imrie headed against the crossbar when he connected with a corner from the right.

With so much at stake and tiredness taking its toll on both sides, it became inevitable the game would be settled by a penalty shoot-out.

As he had done in the Semi-Final tie against Wishaw HSFP when he saved an astonishing 5 penalties in total, keeper Graeme Milne was again the Tower Hearts match winner. Tower converted 3 of their first 4 penalties, while Milne saved two of Fallin’s first three attempts. With Tower holding a 3-2 advantage they then converted their next spot kick to win 4-2 on penalties.